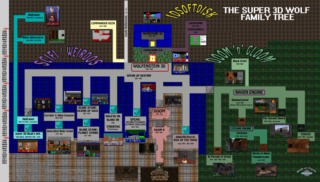 Just a fancy graphic showing how Wolf3D (engine) games have evolved over time and how they are related in one way or another. Wanted to do this already few years ago but never got around it. It's not pixel perfect or has the most accurate date stamps ever. It's hard to say when some games were actually released. Tried to research everything to some degree and combined some facts here and there. Checked file dates, early releases/demos, game data, trivia and so on.

There is some general influence at the beginning coming from Dungeons & Dragons sessions of the id Software guys and the games of that era. The Raven side is drowning in RPG elements as well.

Aslo the Raven side, ROTT and Doom went for DOS/4GW to have more memory, while the left side stuck to the 640k limit.

TED5, the tile editor, plays also a role in most of these games since the levels were made using it and giving the games a distinct design focus around tiles. The Raven side had it's own tile party and editor going on. At the end of the day Doom came along, crashed the wild tile parties and almost drove tile-based fps to extinction.

* Wolf3D Part II until id was scared of possible competition and revoked the name. This turned it into ROTT and longer development time.
* JAM and Blake Stones, which were crushed by Doom.
* The Second Sword from the Raptor: Call of the Shadows developer but was dead on the water.

There is a glitch that shows up in each one of those games using it. When opening a door you can often see some texture pixels on the floor or ceiling shift around. You can find it in all of those games from Blake Stone up to World of Aden with the only being In Pursuit of Greed and Rise of the Triad. Unless i missed it in those two. You can find this bug even in Doom 2, Heretic, Hexen, Strife.

If you want to know what's up with the variable behind it feel free to bother a guy named AryanWolf3D.

Great stuff, very well laid out. Never heard of In Pursuit of Greed before but it looks pretty cool.
Ryu-sama

Nice work, Nexion! Thank you for the chart and the explanations.
Sponsored content

» The Blazkowicz Family Lives in Indiana
» Top 3 most favourite and usable Wolf3D coding features (that wasn't in the original Wolf3D)
» How did you first hear about Diehard Wolfers, The Wolf3D Haven, and The Wolf3D Dome?
» all of the wolf3d in wolf3d dome inside 1 nice big rar file
» JFK Memories or Where Was Your Family When JFK Was Shot
Current date/time is Thu Feb 02, 2023 3:07 am