You are not connected. Please login or register
3 posters

In a time of cold and lonely nights in December 1993 when people were hunting demons on phobos, there were still more demonic aliens hiding in the dark. Well hidden, they rarely made it out of the shadows of thy Doom.

Roughly 2-3 months before Doom and Blake Stone would be released, the development of Corridor 7 had started. We are entering the year 1994 and there is a thirst for more. Soon after, Corridor 7 was released.
It is not unlikely that due to the late start on development things were more rushed. Rushing things seemed to be generally a Capstone Software trend.

This was still many months before Operation Body Count was even in development. For some reason many websites tell you that Body Count was released first, which makes as much sense as terrorist-trained killer rats.

This is a short summary of an early build (JAN 1994) of Corridor 7.
Trying to be more less accurate, there might be some errors and some sections are incomplete. The audio, especially the sounds, still need a closer look as well as the AI and small gameplay adjustments. 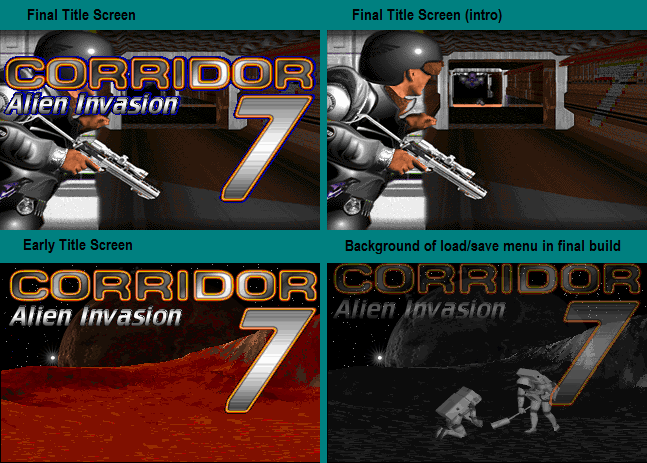 The pre-release was about 3 months ahead of the full release and it was 3 months after project started, according to design documents by Les Bird (Lead Programmer). Even being in the middle of development, this version is for the most part what you can see in the final release.

This demo/beta is dated at beginning of January of 1994 and was released on a German Shareware games disc collection. It’s called “202 Games Spezial” and published by Mustang. It might be dated to September 1994 (long after the final release) and if so then either someone sent them the wrong files or they got it from some mysterious source.

Apart from that there is another early (beta) version, a demo, a full floppy release and the final CD release.
The version covered here should be the earliest existing version.

Click on the image if it doesn't display fully.

Let’s start with something more familiar, like Wolf3D. The beta version still has some Wolf3D assets sitting in the files and the dog is even running around in the second level. Below is a picture showing some of them, but not all the frames and most of them are using the wrong palette. Most curious part is one of the death frames having a grey sphere. Possibly an early test for future concepts.

First, a rather boring and tiny detail. Left are the original keys/map for the hud display and on the right you can see the ones from the beta. There are small differences for the color cycling. 300% zoom for better viewing.

Time to face the walls. There are several walls in the final release that already existed in the earlier version, but with minor changes to them. Nothing too drastic to see here.
There are a few details which got changed like the word “EMPTY” on the ammo machine. The crates seem to stand out more in the beta due to the contrast and the differing brown shades in the palette. Several textures also have been adjusted just for the color cycling.
Left is the full release. Right side shows the beta version. 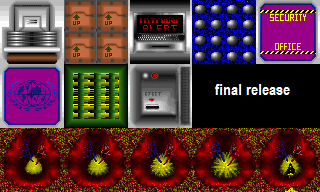 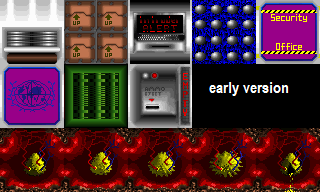 Now for the wall textures that didn’t make the cut into the full release and only exist in this early version. Slot-wise they haven’t been really added or removed. Most of the graphical frames seem to have already existed at this point. For example at the spot in the data file where you can find the metal bar gate, you will find an animated door in the later full release. They kept the layout of most things and mainly swapped the graphics themselves to something similar. 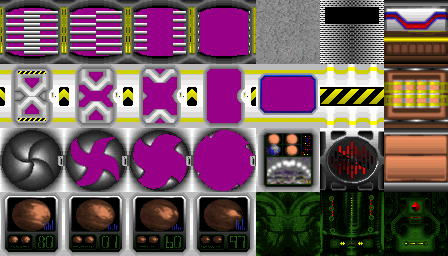 The sprites have a similar twist to them like the textures. There aren't a lot changes between the versions. The death animations are still bit rough and one of the weapon items got split into 2 items. 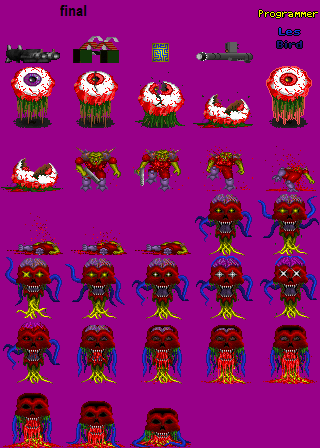 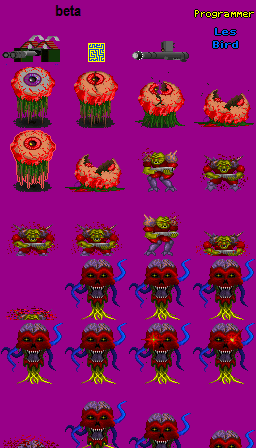 Next are objects that don’t show up in the final release. Not too many but few interesting ones like the shades pick up or a crystal pillar. 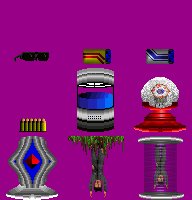 The beta contains 3 odd sprites. The ceiling grass/slime was used for the hanging corpses in the end. Depending on the editors you use you may or may not see some glitched pixels on the other 2. If you encounter either the plant or table it will freeze the whole game.

The biggest difference is probably that the Probe (flying eye with turrets) used to be a robotic drone. It might be the “Tracker” enemy concept mentioned in the design documents. 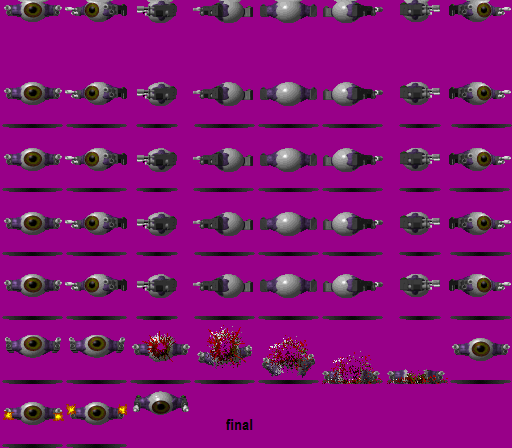 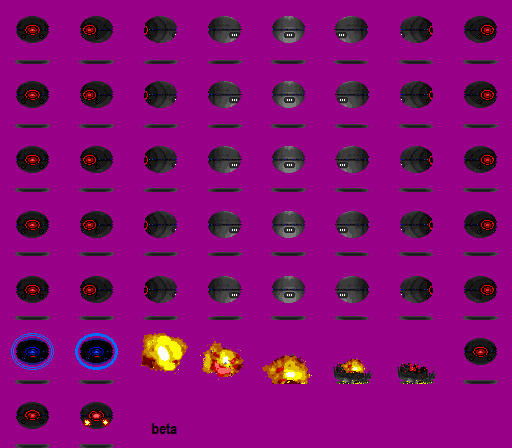 The weapons are all smaller and more simple compared to the final release. Projectiles already existed in this early version. Most made it to the final release but got changed drastically, with the assault rifle/M-16 changed the least and the plasma launcher the most.
The knife is mentioned in the design document as “Bayonet” but didn’t make the cut. 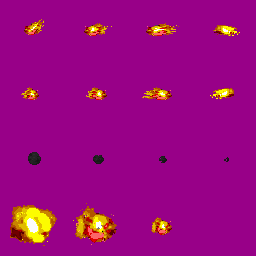 The game itself plays and looks pretty much like it would months later. Nevertheless, there are differences: 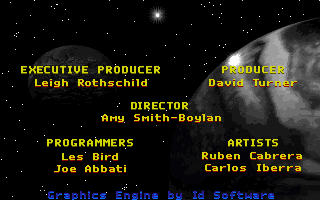 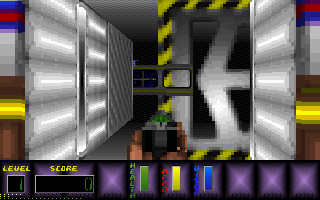 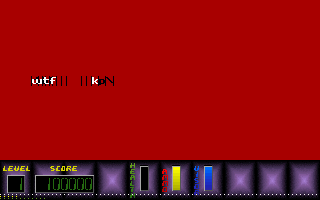 ENGINE
There are dotted bars on the bottom of the HUD which seems to give away some clues about the game. Possibly raycasting checks.

A small difference in memory usage.

If this version was released to the public on purpose then it was probably intended for only the first level to be accessible and playable. There are two more in the files, accessible through debug commands. 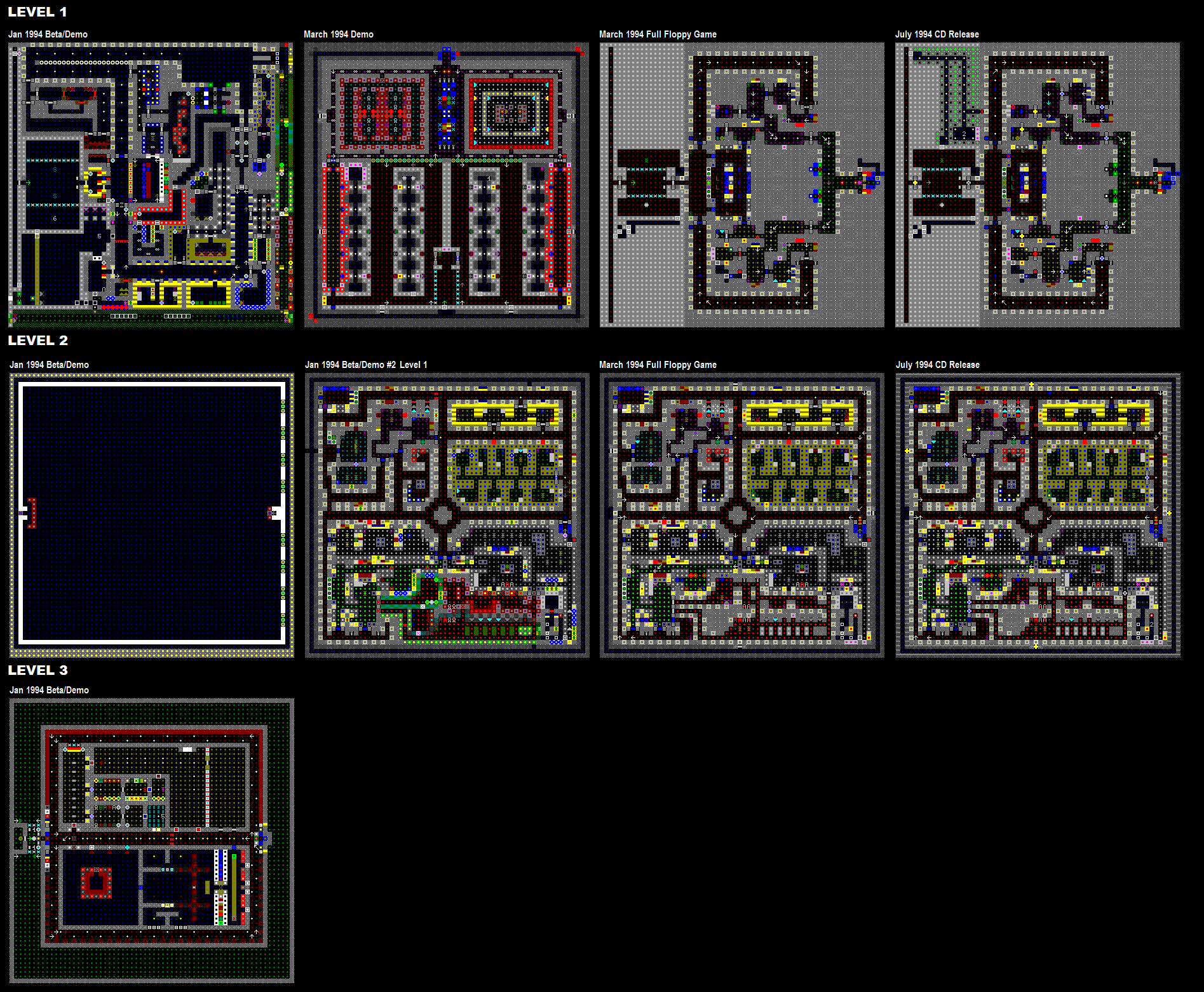 Click on the image if it doesn't display fully.

Here are some screenshots in case you are tired of the article for this chaotic game. The statusbar looks especially rough.
Overall, the design and style of the game stayed pretty much the same until the end of development. They mainly kept adding gasoline to the fire over the next months. Quality remained the same for the final releases. Some things got fixed or adjusted but for the most part enemies, weapons, graphics, music, levels were added. Bit more of everything or rather more of the same. If you have never liked this game then any of the other versions won't fill you with happiness either. 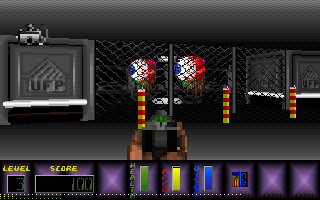 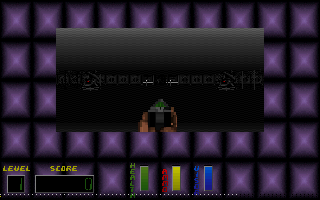 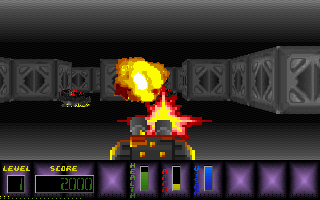 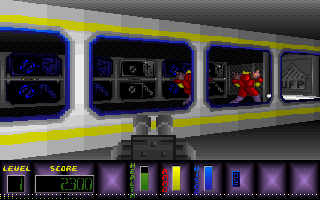 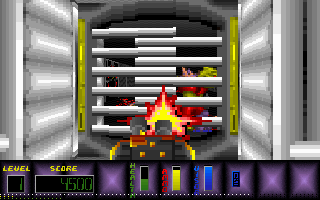 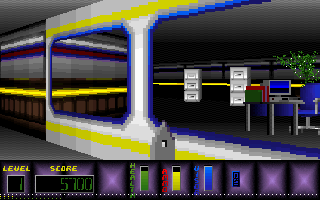 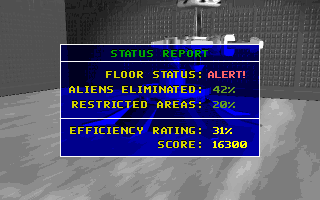 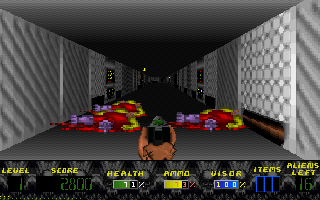 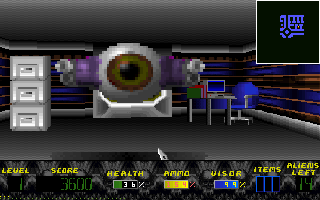 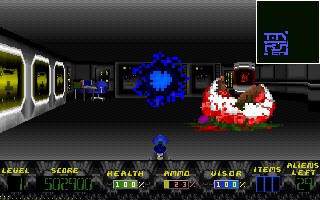 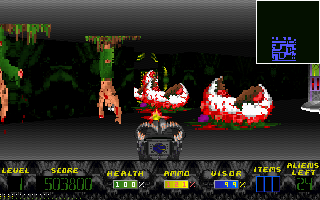 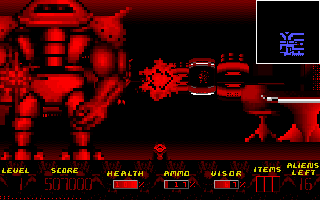 There are still details missing in this long corridor made out of text but as in the style of the game this is incomplete and possibly buggy.
Doomed from the start, the game has some pretty cool ideas and a great atmosphere. Sometimes it helps a game to be rough around the edges to give it a character. Take some DNA of a Xenomorph, rip out Wolf3D’s gut, add the spirit of Doom and you get this piece of entertainment.
If you ever feel bored, there are more than 7 corridors to get lost in. Give it a try or just go play Body Count! 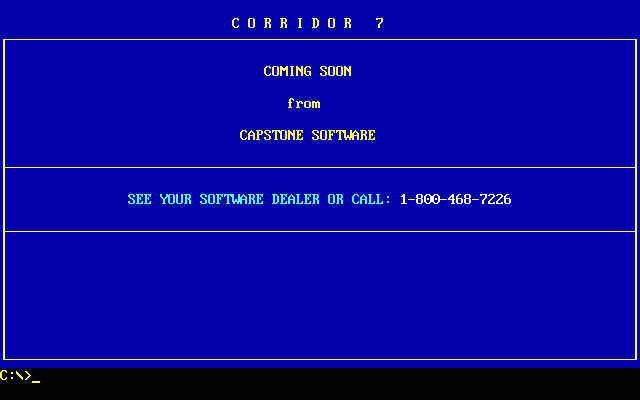 P.S. This was originally hosted on Zombie's wolf3d.net site. It's here now due to his differing opinion on how a community should look like.
stathmk

Nexion wrote:
...P.S. This was originally hosted on Zombie's wolf3d.net site. It's here now due to his differing opinion on how a community should look like.

At this moment, https://beta.wolf3d.net/ is down.  Thank you for posting this.  I'll reread it.

If I'm thinking of the correct game, I believe somebody ported Corridor 7 to Doom 2: Hell on Earth including the code for the alternate ending level.  Edit:  Just do a Bing search for...

Love articles like this. So many details one might miss, and the story of Corridor 7 is definitely an odd one. It is a shame that it never really reached any kind of popularity; then again, the PC gaming landscape changed considerably between 1992 and 1996 in proportions that seem kind of unbelievable with modern eyes.
Sponsored content