You are not connected. Please login or register
5 posters

WOW!! Does this mean I can mods now?!
Dr.Zin 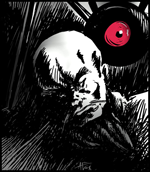 I've heard of it, haven't tested it. I'm, of course, working on my own continuance of Wolf4SDL, but that stems from boredom and my own ideas for a direction. Variety is the spice of life, anyway. The number of Doom ports out their more than justifies me continuing my own work, although judging from what I've seen of the ZDoom and GZDoom community, I expect a degree of snobbery to ensue from the seemingly pervasive attitude of "we're so l33t here" from them. Blzut might be different but I've never been fond of a lot of GZDoomers (including myself, how does that work?)

If a packet hits a pocket on a socket on a port,
and the bus is interupted as a very last resort,
and the address of the memory makes your floppy disk abort
then the socket packet pocket has an error to report!

So it seems my curiosity has gotten the best of me, forcing me to at least look at what ECWolf is. I have no qualms with saying that it is quite impressive. And looking at Blzut's posts over at DHW forums, he isn't some hawty-tawty G/ZDoom modder, either. Looking around, it seems he is quite correct in his statement that he pulls a lot of stuff from ZDoom, as it is more or less ZDoom for Wolf3D. So much so that if you have even basic ZDoom modding knowledge, ECWolf would be a breeze to comprehend with minimal acclimation to the new environment.

It's given me a lot to think about, but I still feel Canis will be sufficiently different to at least warrant me going ahead with it, even for my own entertainment and experimentation. I am thoroughly impressed, humbled and should Mr.Obrzut see my previous post, I apologize for displaying my own intrinsic snobbery

. For the most part, however, and don't see this as disparaging, ECWolf is primarily adapting pre-existing ZDoom code to Wolf4SDL (by no means an easy feat - this requires very serious skill and laudable competency).

But I would say yes, this puts modding within reach of many more people, which is a very good thing.

If a packet hits a pocket on a socket on a port,
and the bus is interupted as a very last resort,
and the address of the memory makes your floppy disk abort
then the socket packet pocket has an error to report!

From what I've seen of ECWolf it looks very promising. A project like this can change what is possible in a Wolf3D mod. Support for widescreen is one of the big features missing from Wolf4SDL. Widescreen is supported in ECWolf, correct?

All I can say is ECWolf has the potential to be marvellous. I look forward to playing some cool mods made with ECWolf.

Does ECWolf support true color video and are there plans to support multiplayer?
Blzut3

And OS X and Ubuntu.

Thanks for posting this. I got a significant spike in my traffic logs.

ECWolf 1.1 should be coming out soon. Just got to fix a few more issues. I'm sure not a lot care about this, but I may have some cool news from Wisdom Tree soon as well (waiting for something to be mailed to me).

Joke aside, unfortunately, an elitist user base is something that pretty much comes with being as popular as (G)ZDoom is.

Dr.Zin wrote:It's given me a lot to think about, but I still feel Canis will be sufficiently different to at least warrant me going ahead with it, even for my own entertainment and experimentation.

I'm interested in what direction you plan on taking for your project? Since you said continuation of Wolf4SDL in your previous post I take it you plan to continue the conservative approach of Wolf4SDL which is similar to PrBoom does for Doom (lightweight, demo compatible, minimal editing features)? There definitely room for a port like that since it would be easier to port to odd platforms than ECWolf (which has higher memory and CPU requirements for obvious reasons). While ECWolf is vanilla accurate enough to pass all nostalgia tests, I do know some hard core purists would be interested in a port that is completely faithful (a task that is extremely difficult to do while expanding soft editing capabilities as much as ECWolf has).

However, if you're planning on making a port with heavily expanded editing capabilities I would encourage you to contribute to ECWolf. Having more hands on a single project is usually beneficial in the long run.

As somewhat of a purist in terms of rendering, I have no plans to change the renderer from 8-bit. I would welcome submissions for optional true color or OpenGL (ES) renderers, but one rule I have for upstream is that the renderer must not offer any features not present in the 8-bit software renderer (excepting for increased color depth). You're, of course, free to maintain a fork that enables any extra features. The texture code, being from ZDoom, already supports storing true color sprites and textures, but it can't render them in full quality.

Edit: Forgot to respond to the second part: Yes multiplayer is planned, but not in the near future. This is just because there are more important things for me to take care of at the moment, but patches are accepted. One thing I have been doing is trying to organize things better so that multiplayer will be easier to add. For example, I have a players array instead of storing player information in the gamestate.
WolferCooker

I gotta give ECWolf a try when all is said and done.
Blzut3

I was thinking about maybe trying to do a few videos on ECWolf modding. Any topics in particular you would like to see?
WolferCooker

Well I have no idea how to work ECWolf after putting all its files with the files of any mod and then running ECWolf itself. I have no idea to edit things nor get them to work. I'm pretty much stuck.

Bear in mind, I'm not a coding genius, though I have attempted to code in the past.
Blzut3

I have released a hotfix for some game breaking bugs in 1.1.

@WolferCooker, I'll see what I can do. I'll probably get around to something after new years.
WolferCooker

Has anyone tried using ECWolf? Is there still coding involved compared to Wolf4SDL? How much easier is it?
Blzut3

Not that I'm the right person to answer that, but strictly speaking ECWolf does have coding. What it removes is the need for a C++ compiler and all platform dependencies that result. The script formats are a lot simpler to work with than C++ code.

Regarding the tutorials, here's what I've done regarding basic mapping for ECWolf: http://maniacsvault.net/ecwolf/files/tutorials/ecwolfedit1.pdf Let me know if you can follow the general format there or if I just suck at writing tutorials.

Hair Machine has emailed me with interest in writing tutorials for the wiki, so I'm kind of waiting to see what will come of that.
WolferCooker

Thanks Blzut, that'll come in handy when I wanna map, but I'm really interested as to know whether adding more weapons, enemies, textures, static objects, and such are exactly the same and using the same steps as Wolf4SDL.

I'm gonna try and resurrect my motivation to mod.
Blzut3

Scripting actors is definitely not the same steps as Wolf4SDL. For example here's the brown guard as it is defined in DECORATE: http://maniacsvault.net/ecwolf/wiki/Classes:Guard

An intro to DECORATE is what I plan on writing next. I started with MAPINFO since it's the simplest script in ECWolf and, despite the name, is also used for configuring things like player classes (ECWolf supports multiple player classes a la Rott/Hexen).
WolferCooker

So if you want to add a new enemy, particularly an enemy with a hitscan weapon (nazis), you simply copy that whole line of code and define it?

Basically, I'd like tutorials like the coding tips from the Wolf3d Dome which tells you exactly what to do.
Blzut3

It shows static decorations and monsters, but there's still a lot to go over including map translators (so you don't have to replace things) and everything involving inheritance (weapons, items, player classes, etc).
WolferCooker

Heh, this is more complicated than I thought it would be. Perhaps video tutorials will help things out a lot for me.

If I can see what to do exactly do from scratch from a live feed, then I might understand it a lot better.
WolferCooker

Okay how do I get the ECWolf Tech Demo to work?
Blzut3

Drag the pk3 onto the exe (or use --file techdemo11.pk3 on the command line) and then, if it prompts, select to play Wolfenstein 3D.
WolferCooker

I tried that, but the command line screen only pops up for a split second and then disappears. It didn't do that to me if I have a Wolf4SDL exe on there for some mod or possibly the original Wolf3d. Problem is, it only plays what's on the EXE plus the WL6 files.

Do you need to include the original Wolf4SDL exe and its WL6 files to run ECWolf? Because that's the only time it works for me. Without them, ECWolf doesn't work.

EDIT: it works ONLY with the shareware or full versions of Wolf4SDL. Perhaps you should've mentioned that the day when ECWolf was released
Blzut3

WolferCooker wrote:EDIT: it works ONLY with the shareware or full versions of Wolf4SDL. Perhaps you should've mentioned that the day when ECWolf was released

First thing it says on the downloads page: "Requires registered or shareware game data from Wolfenstein 3D and/or Spear of Destiny. The games may be purchased on Steam or you may use the shareware files provided below. You only need the sod, sd2, sd3, sdm, wl6, or wl1 files."

You don't need the Wolf4SDL exe (or any other exe), but you do need the wl6 files.

Edit: I have edited the description of the tech demo to clarify that it requires the full version of Wolfenstein 3D in case that is what was confusing?
WolferCooker

Aren't there only 10 levels? If so, you might as well say at least the shareware version.
Blzut3

While it might work, I do not know for sure if it works with the shareware. In ECWolf the level progression is completely customizable so the number of levels doesn't need to correlate with the base data. What matters is what resources from the base game are used by the mod.
WolferCooker