During lockdown in January and February, I had a lot of free time on my hands all of a sudden and decided to play some mods I had not played in a long, long time. One of them was Brian Lowe's Blake Wolf which was the first mod I ever played, way back in the summer of 2003. Before that, I had played some of Blake Stone, but not very much as my playing chops were awful. But I loved the aesthetic and was pleased to see it in Wolf 3D. I schemed many times about making a project in the same vein, as far back as the Possum Trot days. A bunch of projects over the span of fourteen years that never got off the ground, including Lab Assault, LabWolf and TEK (which was to feature a 90's IT environment with a vaporwave twist) and their DNA is finally splurged out in this 8-level mod.

My most recent mod does away with most classic Wolf inclinations and instead utilises a host of enemies (or edits thereof) from Blake Stone, Corridor 7 and - of course - Majik Monkee's Image World. I found there was a lot of material out there I had never used in my own mods, including the at one point over-used ROTT guards from the Image World. Inspiration was also found in a handful of old mods I really loved that had this certain kind of atmosphere, including Absence, Area 51 and Mutant Blobs From Uranus. Anyway... I had a ball making it, at least during lockdown, as it was exciting to tread new ground. Hope you will enjoy it!

It takes place in an alternate universe in the far, far future known as the year 1998. BJ is finally thawed after having been cryogenically frozen for 50+ years, waking up to an aftermath where the Axis powers were victorious and established a space station that they soon realised they did not have the cash for keeping up with, leaving it to rot together with its brainchild, the mad Doctor Quarkblitz.

Music has been changed, close to all graphics have been changed or altered somewhat... Even AdLib sounds (a first for me) have been changed or swapped around with some goofy ones I never heard in any other mod, though they were present, buried deep in either Blake or Wolf's original AUDIOT. Or is it AUDIOHED? The hell do I know. Some extra features from my most recent EXE - courtesy of the great AlumiuN - include greatly increased ammo, God mode, 4 keys, animated objects and a host of other pleasantries.

The mod is called SPACED OUT! and is able to download here (until a Wolf Source link will appear)... A few screenies: 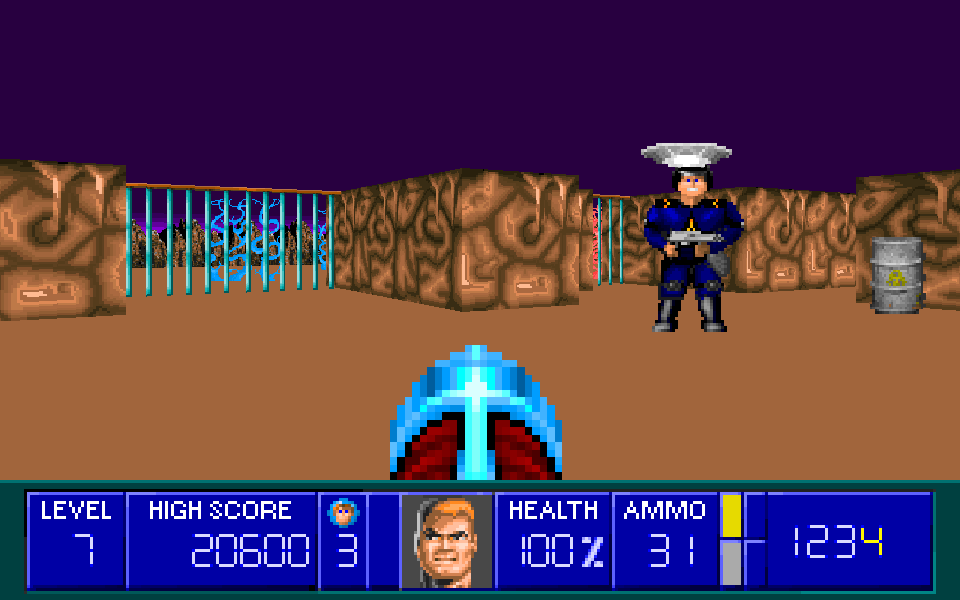 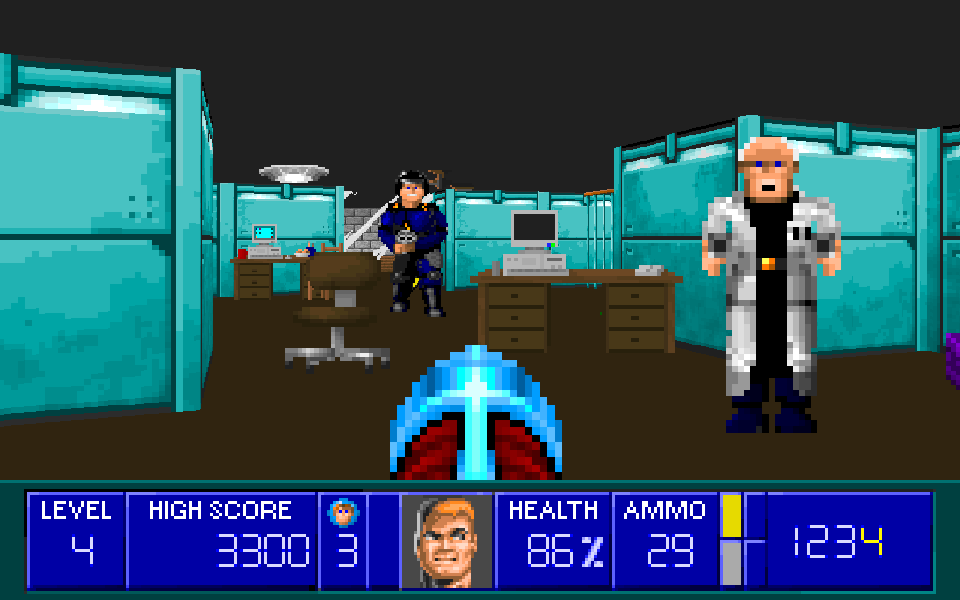 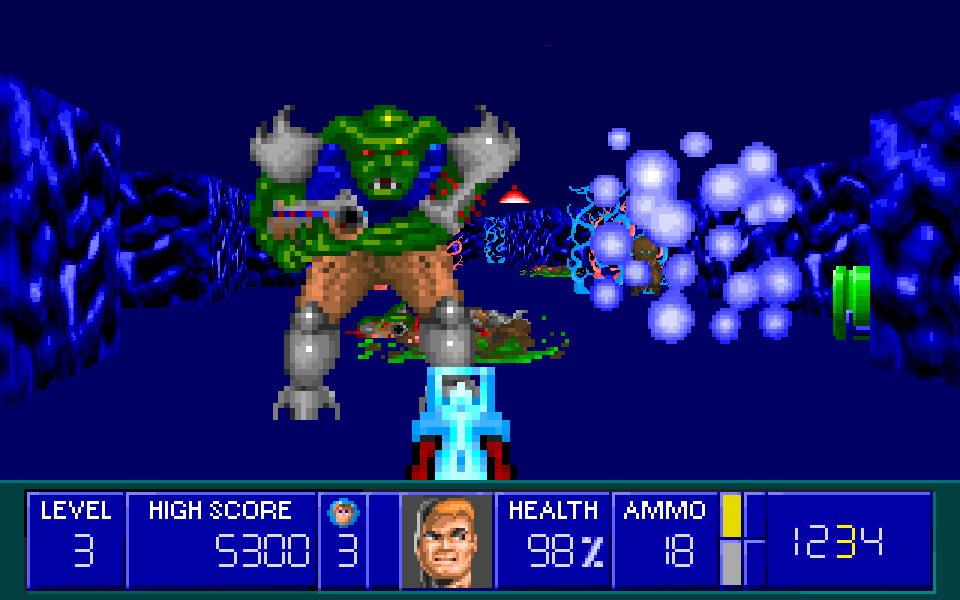 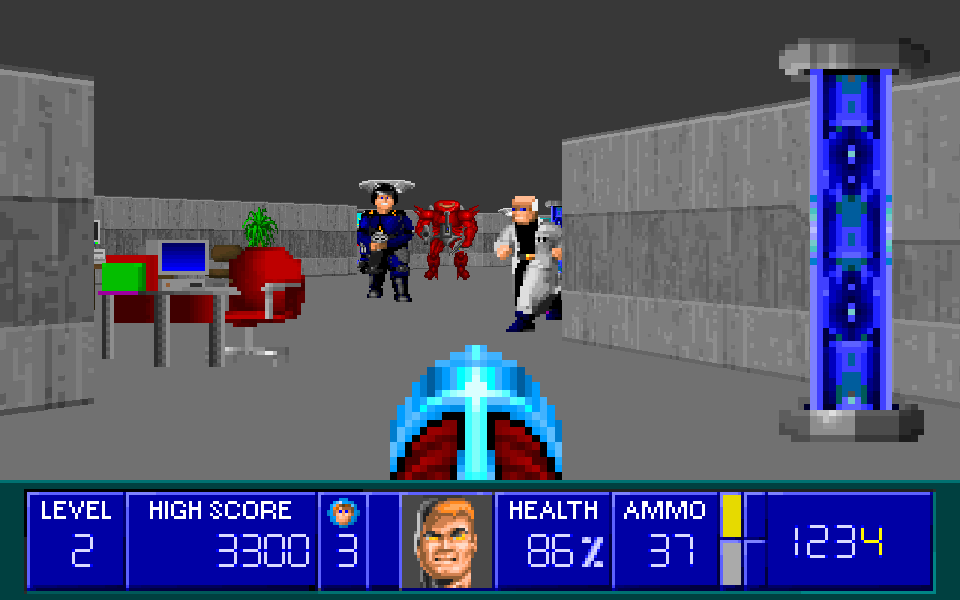 Many, many thanks to Gerolf who did the beta testing, and assisted with some much needed souping up of Blake material. Enjoy, folks!

WOW, that's great! Thank you very much, I'm going to try it as early as I can.
Nexion

Good stuff. Overall a neat, slightly goofy b-movie scifi theme and some blake stoney space offices. Colors range from teal over orange to black. The Windows start button on the walls made me want to press it each time. Fun little nods to Wes' Thing mod. Highlights were the levels, blue space (3), black space (6) and brown space (7). Level 6 was the easiest map in my opinion. Took me 0:49 the first time and 0:51 the second time. 0:20 has been so far my fastest run. I think level 5 took me the longest. The final boss could have been more spaced out.
Ryu-sama

I still play it - due to lack of time.

But the levels I played so far are great stuff. I like the atmosphere over all and the wall textures are nice. Another thing I'm really fond of since your "Another Boring Map Set" is the teleporter. That's a really great item.