The original Wolfer Profiles are at http://www.wolfenstein3d.co.uk/profiles.htm .  I want these other profiles to be in a thread so that you can update it yourself if you change jobs or etc.  “Anything else?” & “Post 2 pictures of yourself” are now added.  Please don’t get too crazy or controversial with these profiles or I’ll delete it.

When did you first get in touch with Wolfenstein?

How did it come to a membership of the Wolf Community?

What in the community are you most proud of? And of what the least?

Any words of wisdom for the readers?

How did it come to a membership of the Wolf Community?:
These are about the first 8 reasons off of the top of my head:

1)  In 2009, when I had heard that The Dome webmaster Brian Lowe's files have a size limit of 1.5 megabytes, I knew that I could store larger files on what would become wolfensteingoodies.com.
2)  I knew that Brian said he was a senior having a hand problem with what he thought was chronic fatigue syndrome.  That's another reason why I thought that I might have to eventually be the one to have Wolfenstein 3D mods emailed to for sorting out.
3)  Wolfensteingoodies.com was going to be a big part of my after-college web portfolio since I majored in Computer Graphics Technology in college.
4)  I also wanted to collect Wolfenstein 3D mods in Doom 2 such as the ones made by Laz Rojas & mods in other computer game engines.
5)  I also want to go back to Wolfenstein 3D art, animation, and C coding.
6)  I enjoy being a moderator at wolf3d.darkbb.com.
7)  I want to scan Wolfenstein 3D memorabilia & other projects.
8 )  Since I was a child, I thought that it would be cool to make a Mario game, Wolfenstein 3D-style game, or Doom-style game.  Now I can.

What in the community are you most proud of? And of what the least?:
Making friends and eventually making a medieval or Greek Mythology Wolfenstein 3D mod would be what I'd be proud of.

Any words of wisdom for the readers?:
Be patient & first look at the tutorials before releasing a mod.  They are under "Editing" at http://www.wolfenstein3d.co.uk/ .  For Heaven's sake, don't plagiarize ( https://wolf3d.darkbb.com/n3449-mod-makers-who-plagiarize-any-more-will-be-banned ) or submit a mod of randomly generated levels.  I'd look forward to new graphics, sounds, resources, & coding in your mods.

Anything else?: Does anybody know where Tris is at?

This was a high school senior class photo: 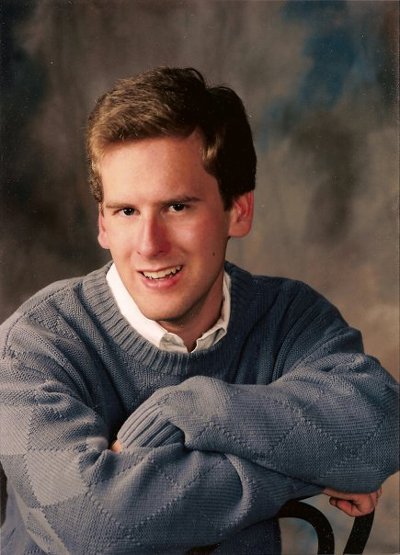 This was when I won 12 pizzas for over the course of the year.  It was for being 1 of the first 25 at the grand opening of The Domino's in our city:

When did you first get in touch with Wolfenstein?:

1993. My dad had the old shareware version on our 8MHz 386SX. I remember asking him if I could play it, not knowing what it was. It completely blew me away the first time I played it. I spent hours, not having a hint manual or map editor, discovering every nook and cranny of Episode 1.

How did it come to a membership of the Wolf Community?:

In 1997 I finally acquired the full six-episode registered Wolf3D set, which renewed my interest in the game after having become bored with only having Episode 1. It was early 1998 that I had the crazy idea of looking the game up on the Internet, where I discovered Gary Ragland's old blue Wolfenstein 3D page with several sets for download and some editing tools. It was like a dream come true. Ever since the beginning, I always dreamed of making my own levels. The first mod I played was Temporary Insanity followed by the Wolf_CC1 series. After that, I made my own first set which was called Wolf3D_60. I would hardly recommend that set today (in terms of level design its everything NOT to do), but I thought it was great back then and was very proud of myself when I sent it to Gary Ragland and he posted it on his page. I followed it up with a Spear set called the Lost Fortress and then another Wolf3D set called Domination, which in my opinion was my first attempt at actually decent level design (though its still not that great in retrospect).

In 1999 I launched my own site, Barry's Wolfenstein 3D Page (the precursor to the Wolfenstein 3D Vault) and released Armageddon. I followed that up with the Road to Neuschwanstein in 2000.

What in the community are you most proud of? And of what the least?:


Most: Finally releasing Passage to Hollenteufel as well as the level design quality of my upcoming Atomprojekt. Also proud of my classics Armageddon and The Road to Neuschwanstein, though replaying them now I can't help but see their flaws compared to my more recent stuff.

Any words of wisdom for the readers?:

Don't map when you don't have inspiration just to get something done as it will show.
Ryu-sama


Nickname: Ryu-sama (and a couple more)

Occupation: Student at med school in Bofhum (I'm very fond of neurology and want to be a neurologist.)

When did you first get in touch with Wolfenstein? Uhm, 1994.

How did it come to a membership of the Wolf Community? I was curious. Plain and simple. I always like to get to know new people and possibly becoming friends with them. I'm an open-minded person, but I have some values I adhere to and try to follow them.

What in the community are you most proud of? And of what the least? Mhm. Can't say. But I guess being friendly is always a good thing to be.

Any words of wisdom for the readers? "Even if you drive very fast, you won't be quicker at your destination."

Anything else?: I like quite a lot of things (as you can see in my introduction), and I hope that everybody is nice over here. I hope to read many interesting things about Wolf3D and mods (and stuff). I'm not into modding (yet), because I simply lack the time. I really like singing, music and much more.


I hope you can see the pic I'm posting. It's an extract of a far larger picture of my choir. It was taken at the local theater last year where we perform on stage some times during the season. The red arrow points at me.


If one knows me one will spot me in the first line at the right - next to a guy with black hair and specs, I have a different beard and wear contact lenses. Actually, I'm the second on the right in the front row. At that time, I sang bass and now I'm a member of the first tenor (quite a jump one might say).

I'm sharing this video with you because it was quite awesome. My brother had birthday on the day (Saturday, 25th) we performed Beethoven's 9th symphony. The whole day it had rained so much, during the general and final rehearsal as well, and two musicians of the orchestra nearly slipped and fell. In the evening, during the 8th, it was still raining, but the sky cleared up for the 9th. It was so brilliant - and everybody was very happy afterwards. "Fun fact": the first referendum in Britain for the Brexit was a day earlier. The conductor is such a great person - I had to sing solo to become a member of the choir - and he repeated the final chorus for all the people (the two choirs and the audience) to sing it. It was really, really great. I'm really proud to be a member of the Konzertchor. The Konzertchor is one of the oldest choirs in Germany, it's now 203 years old. We have a close relationship with the main theater and the conductor of the local symphonic orchestra whose conductor conducts us as the artistic director when we are on stage.

Gruppenfoto-v.O.jpg
Part of the choir. That's me with the glasses and the red arrow.
You don't have permission to download attachments.
(55 Kb) Downloaded 2 times