Curiosity About The Dome

Curiosity About The Dome

Hey guys, long time no see!  I've been a bit busy on programming my game See No Evil (http://www.snegame.com/) as it's been nearing completion, but I just wanted to check in on something.

I've noticed that The Wolfenstein 3D Dome has updated its site to have a bit of a revamped face.  There haven't been any news posts in months since Brian had to take relinquish himself from the constant updates, so I was surprised when the Dome suddenly got this makeover while retaining its inactivity.  I like it, but I was wondering if I could assume that this implies a return to a regular update schedule.

I do love seeing the Dome as the place to have an eye on all Wolfenstein modding going on within the community without having to slog through forum threads and I'm also fairly nostalgic from my days going back to Grade School and Middle School where the Dome was the hub where young and inexperienced modders (like myself at the time) could go to upload a mod and see that it reaches an audience.  Whether or not Brian returns to the regular updates I'll always appreciate the role he played in making this modding community connected, welcoming, and well documented.

Anyway, any information on that would be appreciated.  It's always a pleasure to drop by and see my old friends still making awesome mods

Keep at it, guys!
Dark_wizzie

Number of posts : 5119
Age : 27
Location : California, USA
Job : Investor
Hobbie : Computers, chess, computer chess, fashion, and philosophy
Message : I made this forum when I was 13

I actually don't know what's going on with the Dome and what's up with the facelift. Maybe Stathmk will know more.

Anything regarding to the Dome should be sent to Andy Nonymous. On the DieHard Wolfers' Forum he has run a petty successful "Ersatz Dome News" thread in which he posts everything released since Brian's injury.

But joining the DHW is like running through quicksand. I think there was a server problem or something, hindering people to join since November 2013. But the thread is still visible as guest: http://diehardwolfers.areyep.com/viewtopic.php?t=6798

That's all we need, in my opinion. I hate to see spin-offs of the Dome 'cause they're so unconvincing and not that necessary at all. As long as all is collected in one place, that's enough.
dunkelschwamm

Thanks Thomas.  It's good to know that the information remains to be well connected or consolidated to a reliable news column.  And I agree entirely about Dome offshoots that fail to capture the lightning that the Dome did.  I sincerely hope that the Dome returns to its news schedule eventually but understand entirely if Brian no longer wishes to or is unable to continue the rigorous news updates.  Many positive thoughts are being sent his way for his recovery.
stathmk

@Dark_wizzie wrote:I actually don't know what's going on with the Dome and what's up with the facelift. Maybe Stathmk will know more.

I don't know what's going on with the facelifted graphics.  Brian Lowe (Schabbs) said for at least a year or 2 that he has chronic fatigue syndrome.  From my understanding or misunderstanding of his hand problem, I told him that the next time that he talks to his doctor that he should be checked for dopamine dystonia.  It's a condition where you can't move your hand.  He emailed me back this year that when he went back to his doctor that his doctor told him that he has Parkinson's.  He's still around, but I miss him.  I'm glad that we have our health.  He also told me that I can archive The Dome.  I also have to check every link to do that because some of the files are only stored on other people's pages.

If any of you have a Wolfenstein, WolfenDoom, or Rise of The Triad web site that you're not updating anymore, then email me and I'll archive it.

I haven't been updating wolfensteingoodies.com in a timely manner partly because we're fixing up a house to move.

Re: See No Evil

Thanks for the update, stathmk.  I'm glad to know Brian is not hurt, but wish him well with the chronic fatigue and Parkinson's.  And very good work on archiving the sites.  I'd hate to see them disappear.  You're definitely doing the community a massive service!

Also thanks for the mention about the game I've been programming!  It's definitely a step up from some of the Wolf mods I made back in the day...

I love playing mods like these... They're easy to play, mostly, and the effort in itself is enjoyable. Everybody loves a chain gun boss battle. I love "newbie" mods - I spent my first year in the community making stuff like that. It takes me back to a place in time where Wolf was no. 1 in my world and there were no problems.

I forgot the name, but I do remember playing the one pictured left, below. The one with the pizza-faced alien or whatever in a neat gray uniform... Lol... 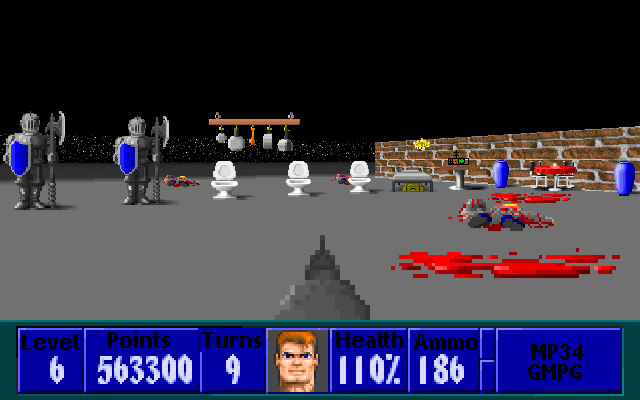 Who. the. fuck. would barricade a landscape which armors, toilets, a bed and other random shit, tinseled off with a couple of pots and pans? For some odd reason I can't stop smiling though.

Ahaha!  I think I actually remember playing that one!  Seeing light fixtures and kitchen hangers dangling from what appears to be the night sky before a trio of toilets is what accessible newbie mods are all about!  You've got to tell me what it's called, I suddenly really want to play it

The mods I posted screenshots for were The Ravenous (top two images), Cartosa Lives! (bottom left), and The Subworld Hunter (bottom right, only a demo was released before my computer crashed and I lost the full version).  The guy in the Cartosa Lives! screenshot was the head of a cult with severe burning (an excuse for me to use a flesh-colored Angel of Death head on an Otto body).  Most of my games were usually excuses to build levels around some graphics I had made

Dude!! You're Rocketboy680?! Now I definitely remember all those... The Kevin Cartosa stuff... It actually inspired me to use the store room textures that I heavily use in Abandon, as it's called (stole mine from Op. Letzterschutz, though those in Cartosa were from Doom):

Man! I loved those... Having never really played Spear of Destiny I always thought "how cool he uses the Into the Dungeons tune at level 6..." Ha-ha...
dunkelschwamm

Haha yeah.  I was Rocketboy680 through grade school and changed it to RGamesINC in middle school.  I didn't think that anybody actually played much of the Cartosa series, it was a weird few mods of me mostly making whatever I felt like at the time.  Now that I think about it that series was 10 years ago too

Good stuff, those old days let us make a lot of crazy stuff without thinking about how much sense it made!
Sponsored content