As some of you know I'm working on a new, mod friendly source port known as ECWolf. I'm glad to see that there is some interest in the project already, and even more so to see that this community already has some knowledge of modding for Doom (which of course will be very similar to working with ECWolf).

In case you didn't see Executor's link, the website for the project is http://maniacsvault.net/ecwolf/ . I think my description there sums up the project well. The only thing significant I didn't discuss there is that I plan to get a stable release done within a year (obviously it won't have everything I mentioned there as some are long term goals). Of course if I can't get patch data the project probably will fail (unless everyone has the non-Read This 1.4).

I've just been informed that my patch generation instructions were slightly off so those have been updated. I've also been sent patches for v1.1 and v1.2 to v1.4 non-Read This. (The 1.1 -> 1.2 patch is assuming the exe is the same.) I also have downgrades for each of those versions, so at this point what I really need most is a patch to get to the Read This/Apogee v1.4.

I've also contacted Adam Biser, so a new map format is in the early stages of development.
Blzut3

The new map format is basically done being defined. If anyone is interesting there's a link to the document and a description of the new format on my weblog . Nothing's implemented yet so if anyone has any questions, comments, concerns, or suggestions let me know and I'll try to address them.
Blzut3

Finally have something to show off: 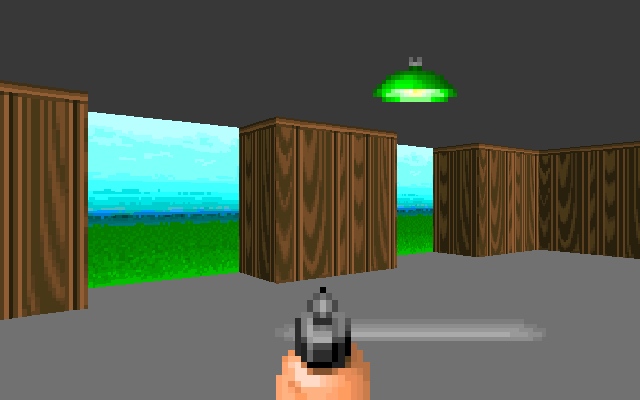 What you're looking at is a map generated entirely by a text file, and yes those are half tiles. Although I don't expect anyone to make maps in notepad, here's the script for the map if anyone is curious: http://pastebin.com/fMMR1Dt6

Once ECWolf is released a script such as that one would go into Doom wad file which can be loaded to replace the stock maps. The wad file may also contain things such as custom textures or even custom things. The release is still a ways out though since right now I still have much to re-implement. For example right now only static decorations can be defined (well they can animate but I don't have any code pointers implemented yet so nothing moves).

Edit: Almost forgot I wanted to mention that it should be possible to freely mix high and low resolution sprites right now. I haven't gotten a chance to get the Mac wolf resources to test it, but the sprite drawing code does take scaling into account.
Blzut3

The DECORATE parser is basically done and I've now moved on to actually implementing the various properties, flags, and functions. Custom monsters are possible now and in fact most of A_WolfAttack is supported (no bullet puffs yet). Working on the Inventory system now which once finished should make ECWolf playable again.

Of course if anyone wants to take a look at the DECORATE scripts in ecwolf.pk3 they are available here: https://bitbucket.org/Blzut3/ecwolf/src/d9b8b9351248/wadsrc/static/actors/

Hopefully I should be able to get a public build by the end of the year.