This is a 6 years anniversary release. On September 26 2014, I released a new port of Keen Dreams, initially titled "Chocolate Keen Dreams".
Although Keen Dreams was released earlier in the same month, I actually started some work on it even earlier, after the Catacombs were open-sourced (in June 2014). Reason is that I already knew that a lot of the code was common.

Following Keen Dreams, I added Catacomb Abyss, then Catacomb 3-D, and finally the rest of the Catacomb Adventure Series.

Recently, I've been working on the source ports again. With the assistance of the gamesrc-ver-recreation/wolf3d tree, the last release introduces support for Wolfenstein 3D, Spear of Destiny (excluding the mission packs) and Super 3-D Noah's Ark (DOS version).

There are still some problems. In particular:
- You can't save games or load saved games in Wolf3D and the games based on it.
- These games have no support for the "modern" game controller scheme. I think that the other games should still have it, though.
- For technical reasons, you can't load the Spear of Destiny mission packs.
- More generally, you can't load TCs made to work with original EXEs from the 90s (as released by id and/or related publishers). I still haven't decided how to approach this.
- In order to detect game data, you also need the original DOS exe (albeit the 2015 edition of Keen Dreams is an exception).
- For Super 3-D Noah's Ark, this exe currently has to be named noah3dos.exe, as this is the way it arrives from Steam right now. Currently, there's no good way to support auto-detection of data with alternative file names.
- The rate of palette updates in Wolfenstein 3D is at least somewhat imprecise.
- VSync is disabled by default for now. There are other potential problems with timing in Wolfenstein 3D, which might partially be related to instances in which the game tries to render more often than the host display's refresh rate.
- Stereo panning remains unimplemented.
- For the Wolfenstein 3D based games, if you try to use a wall right after pushing it, the behaviors are essentially undefined.
ossirot

This is great, just tried it out for a bit and it feels very solid. Looking forward to see more from this, great work so far.
NY00123

@ossirot wrote:This is great, just tried it out for a bit and it feels very solid. Looking forward to see more from this, great work so far.

Thanks for your interest and for checking this port out!

A new release is now available. The most important update is probably the addition of support for the Spear of Destiny Mission Packs. There's more, like the detection of more possible locations for game installations, as well as support for more versions of Wolfenstein 3D.

* Support more than one possible filename for game data and EXE names.
Following this, a file named "NOAH3D.EXE" can now be identified as
a part of Super 3-D Noah's Ark, in addition to "NOAH3DOS.EXE".
This refers just to the matching DOS executable.
File integrity check is done using the size and crc32.
* Additionally, again thanks to the above, support for the
Spear of Destiny Mission Packs is now in. Reason it's related
is that the file extension of the mission-specific game data can vary,
depending on the game installation being in use and its current state.
For all missions (including the original), .SOD and .SD4 are valid
file extensions. Other allowed extensions: .SD1 for the base game,
.SD2 for mission 2 and .SD3 for mission 3.
* Note that as a side-effect, data integrity checks are now done for all
game data (graphics, maps, sounds) read from the Wolfenstein 3D codebase.
In addition to earlier uses of it, the hidden "manualgamevergame" setting
can now be used to disable this, albeit this might make it impossible
to properly start Super 3-D Noah's Ark or any of the Spear of Destiny
missions, depending on the filenames.
* Add support for more versions of Wolfenstein 3D, again by using code from
gamesrc-ver-recreation. This covers Apogee 6-episodes versions 1.1, 1.2 and
1.4, two GT Interactive releases, an id Software release, Apogee 3-episodes
versions 1.2 and 1.4, an Imagineer version and the March '92 prototype.
(Thanks to the wolf3denginepatches repository and Chris for assistance.)
* Add detection of Wolfenstein 3D as it used to be offered via the
last incarnation of 3drealms.com, either on its own or as a part
of the 3D Realms Anthology. (Thanks Lunick.)
* Add detection of Wolfenstein 3D, Spear of Destiny and Super 3-D Noah's Ark
as currently available from GOG.com. (Thanks WayneCa and chungy.)
* Improve detection of game installations which is done by inspecting
the Windows Registry. Basically, this is now done by attempting to
inspect data for 32-bit and 64-bit applications altogether, while
additionally still trying to get data with SHGetValue as usual.
* Wolf3D: The UPLOAD macro was replaced with an UPLOAD variable.
* Internally rename the wl1ap12 namespace to wl6ap11, and do the same with
other mentions of such strings. Most noticeable impact is probably
that when separate Wolf3D EXEs are build, reflection-wl6ap11 is
created instead of reflection-wl6ap12.
* Typo fix: Do show "Wolfenstein 3D Shareware v1.4 (Local)" when referring
to shareware v1.4, instead of mistakenly mentioning v1.2 in the string.
* Use a bit shorter descriptions for certain Wolfenstein 3D and
Spear of Destiny versions, so they can fit as launcher titles
(BE_Launcher_Handler_SupportedGameVersionSelection).
* Add high level XMS and EMS implementations, use them in Wolf3D's
Page Manager, and also remove the REFKEEN_SIMPLIFIED/NOEMS/NOXMS
implementations from Wolf3D. (Thanks Blzut3.)
* Wolf3D: Following the removal of the REFKEEN_SIMPLIFIED-specific code
from id_pm.c, pointers can now be appropriately converted in ShapeTest.
* A small fix for using page up/down in the launcher while
none of the menu items can be selected.
* A couple of fixes for bugs introduced after the audio mixer refactoring,
specific to runs without the audio subsystem.
* Separate more audio and timing related code into more files, while reducing
direct references to SDL (albeit it's still used in the same manner).
* Generally, continue splitting the contents of be_cross_fs.c and
making other restructurings and differing changes related to this code.
* Wolf3D: Fix a possible buffer overflow in US_CheckParm, reproduced by
passing an argument with no alphabetical character. A good example is
the second argument in the following arguments string: "-tedlevel 1".
* Make the codebase more usable with Visual Studio.
* Launcher: Add a missing comment about the impact of the
scale type setting on the border porches.
* Bug fix: Conditionally hide or show the mouse cursor after
toggling fullscreen, depending on game-specific setups.
* Fix an instance in which the in-game contents don't get
appropriately resized after toggling fullscreen.
* Wolf3D: Make the mouse cursor usable while the game
is paused, if a fullscreen isn't used.
* Other misc. fixes/changes.

Pretty good port, very close to the original. Save/load game is still missing and audio volume is bit low for me but very stable and accurate. Worth a try.
Instead of a wall of text here is how it looks: 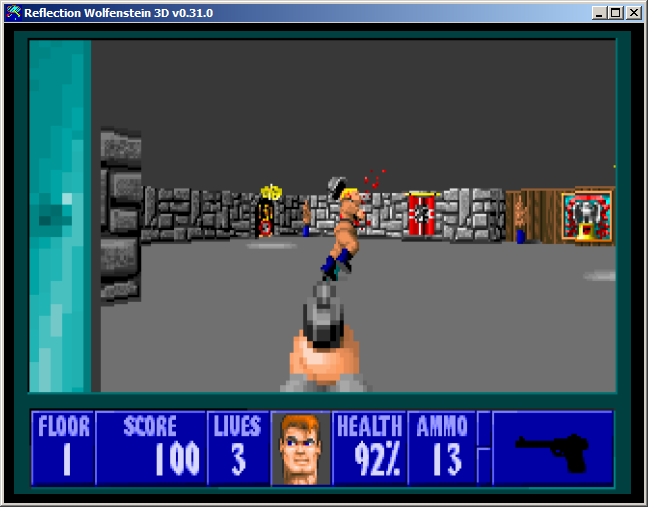 @Nexion wrote:Pretty good port, very close to the original. Save/load game is still missing and audio volume is bit low for me but very stable and accurate. Worth a try.

Thanks for checking the port out, as well as bringing your feedback!

Game saving and loading is indeed still missing, and it's obviously important to get it implemented. I do hope that it can be done in a way which is mostly compatible with original saved games for the DOS versions.

I've had a few investigations regarding the music volume, basically comparing the outputs of two OPL emulators: Nuke OPL3 and DBOPL. Since DBOPL was used before Wolf3D support was added, I locally added the code required for making it usable in the same manner.

It does sound like DBOPL has a somewhat higher output. However, I also noticed that in the most recent Wolf4SDL revision (from last November), if DBOPL is used then the OPL emulator's output is scaled by a factor of 4, instead of 2 as it used to be in Reflection Keen. Maybe I did this on purpose as a way of balancing the output.

I'm ready to announce another release. It introduces saved games support to Wolf3D. They should be written in the same binary formats as the matching DOS versions. On the other hand, due to the nature of the implementation, there may still be bugs.

I also fixed a bug which, unfortunately, may break (partial) compatibility with Keen Dreams and Catacombs saved games. Then again, such compatibility was probably already broken in the same manner with the matching DOS versions.

* KDreams, Catacombs (and Wolf3D): Make it possible
to bind actions to a game controller's D-pad.
* Wolf3D: Support game controllers, in a similar manner to
what's already been covered for Keen Dreams and the Catacombs.
Further add mappings for touch input.
* Wolf3D: Support stereo panning. This might not be fully accurate,
but hopefully, it's not that far.
* Wolf3D: Support saved games. They should be read and written using the same
formats as the original DOS versions. This may currently be buggy by nature.
* SD_TimeCountWaitFromSrc/SD_TimeCountWaitForDest timing fix, applying to
all games, but especially noticeable while playing back demos in Wolf3D.
* Add support for Spear of Destiny FormGen version 1.0, as well as the
variation of FormGen version 1.4 which is actually identified as "V1.4"
in-game. Currently, the one mistakenly identified as "V1.0" won't be detected.
The mission packs' data still needs to be the same as in the
Activision version, thus e.g., including the UAC logs.
* When game installations are shown in the launcher, don't print their
locations for now. This might become more useful later, in case it will
be possible to choose any of multiple game installations which otherwise
match the same version (e.g., due to somewhat differing game data).
It shouldn't matter as much for now.
* A change that may potentially break saved games made
with older versions of the KDreams and Catacombs ports:
The macros COMPAT_OBJ_CONVERT_OBJ_PTR_TO_DOS_PTR and
COMPAT_OBJ_CONVERT_DOS_PTR_TO_OBJ_PTR were fixed. The original sizes
of the object structs, as present in the DOS executables from the 90s,
are now used, instead of sizeof(objtype) from the source ports.
* Other misc. fixes and modifications. Thanks to Blzut3 for
assistance with a subset of the changes in this version.

Great, save/load is much appreciated
Nexion

Tested the save/load system quickly. Worked as intended and no issues. Should make this a nice alternative way to play wolf3d, spear or some mapsets.
Sponsored content