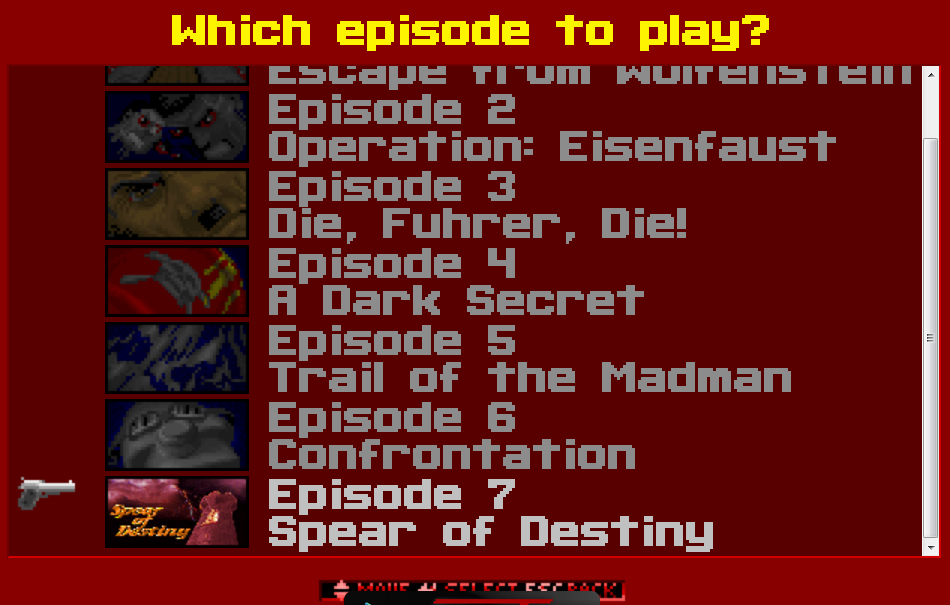 Circa 2009?: Wolfenflash V2 by Glen Rhodes is here.  It still is only episode 1 without secret level.  I don’t like the way that you can’t always pick up the guard’s ammo.

The door is reflecting onto the floor!

May 2012: Bethesda Softworks, which now owns Wolfenstein 3D, put a 3-episode version of it up here.  Click “PLAY WOLFENSTEIN 3D” at the top right.  It displays on a mini-screen with a dusty border.  It’s a version where you get to first warp to any level in the first 3 episodes.  It has deactivated selections from the menu.  Discuss the original 1992 3-episode version.

Select from 3 episodes and then first warp to any of the 30 levels.

The other 5 episodes are disabled

January 10, 2015: Gamespot announces that you can play The Activision Wolfenstein 3D 6-episode version and 2,400 DOS games in DOSBox in your browser.

January 12, 2015: Thanks to Cyanosis on this DHW thread this thread for discovery a Hungarian person’s project for Wolfenstein 3D in HTML 5.  It’s ported by lazarv1982?  It’s actually a merged game of the 6 episodes of Wolfenstein 3D and The Spear of Destiny episode 1 prequel as episode 7.  A change is a different resolution selection screen.

The animation may be a little jerky or buggy in these versions.  With these, you don’t get to make your own graphics, sounds, music, animations, text, levels, code, and endings.  If you want to edit the 6-episodes the 3 episodes of Spear of Destiny, then go to ebay.com or this steampowered.com search.

» Anybody play the facebook game?
» 10 Of The Weirdest Games You Will Ever Play
» Play Three Chess for Three player
» Anyone want to play Draw Something?
» NG-Play
Current date/time is Mon Sep 20, 2021 1:36 pm