The Wolfenstein twin pack and other Wolfenstein games are for sale for at least $3.00 here .

I don’t know belgarath1, but he has some Wolf auctions.  He has 100% positive feedback.  His items show that he lives in America and will ship to America.  You have 3 days to bid before the auctions end.  One of his auctions is for The Wolfenstein: The New Order and Wolfenstein: The New Blood twin pack edition that I didn’t know existed.  Another auction is for The Wolfenstein 2009 game.  Another is for Wolfenstein II: The New Colossus.  These are the PC versions.  Shipping for everything is at least $3.00.  He also has an auction for a non-Wolfenstein expansion game, and a lot for a Game Boy Micro black with a charger and 3 games. 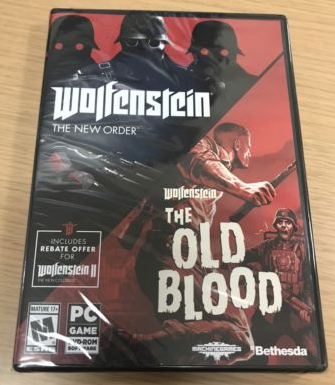 The twinpack of Wolf PC games.

On a personal note, it’s OK with me if you want to post something for sale mostly related to Wolfenstein, Apogee, 3D Realms, or Bethesda Softworks into this thread if it’s to somebody with 100% positive feedback, nobody is offended, and you either later delete the post when it’s no longer for sale or put strikethrough through the text when it’s no longer for sale.  I’m not offended if nobody else is offended.  Just don't have an argument when somebody else gets the winning bid or do something like that.

The Gamestop Game Days Summer Sale is from now until July 15.  Wolfenstein II: The New Colossus for the Playstation 4 and for X-Box One are half off at $19.99 instead of $39.99.  It says that the season pass is available, but I believe that it costs $24.99 more.  The PC version that’s on a disc is $19.99, but the download version is $59.99.  The PC Deluxe Edition is $79.99 and I don’t know how it’s different.  The PC Collector’s Edition is $34.99.  The PC eGuide download is $9.99.  The advertising pamphlet said that all strategy guides are 50% off, but if I can’t find the print edition of The Wolfenstein II: The New Colossus Prima Guide on gamestop.com, then I think it might be sold out for awhile.