Green Arrow is the latest mod by Team Raycast. Based on the Arrow comics and television show, you will be playing as Oliver Queen aka the Green Arrow. Forced to go on a mission by Amanda Waller, Oliver has to return to the island where he became the Arrow: Lian Yu, also known as Purgatory. A dangerous mission awaits...

Mod is standalone, no additional files or software are needed to run it.
Read "Read this!" section before playing. Coding by LinuxWolf,
Mapping by RonWolf and Serpens,
Art direction by DoomJedi
Story screens by Atina
Voices and music by Ronwolf.

The mod is absolutely free, as usual.
But in case you feel you'd want to support the team - you can donate here:
paypal.me/TeamR

Oh regarding level 16, there wasn't an error it was a clever mechanic to get the 1 up.

I will continue through it, and hopefully there isn't more underwater/oxygen tank levels, that's quite difficult, having to time the oxygen grabs and knowing where to go and stuff. Anyways, this is my first run through the game so it is a blind run.
doomjedi

There are no more such levels

I found the secret exit on level 13, but it lead me to level 14 (both exits). I can send you my save file just to show you the problem.
doomjedi

Wow.
Hope it's not a bug...we'll try to check it ASAP
doomjedi

Thanks doomjedi and since I've nearly completed level 13, that means I have to do it from the start again?

Edit: Oh nevermind, I'm able to continue with the mod.

Anyways, I've just beaten the game and oddly on the final level, despite collecting all the treasures, the end game ratios show up as 94% for all categories. I'm not sure if it is a end game ratio glitch or what, but it is odd. 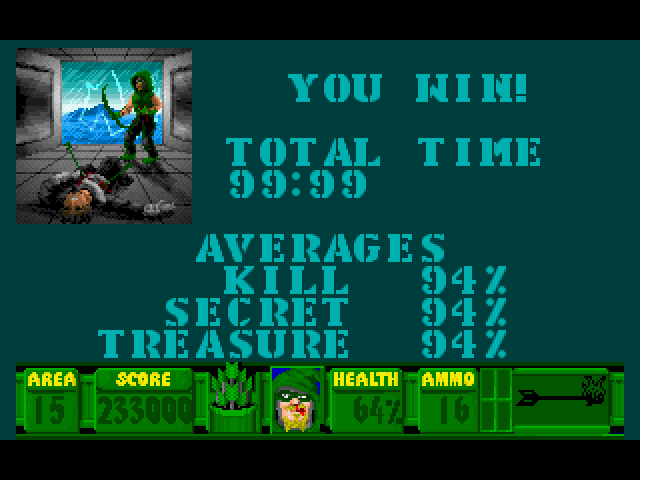 So here is a brief review of the game. I really liked the characters and how they relate to the actual TV show, plus, the boss enemies have a health bar so that's always handy.

My most favorite feature is that when Oliver dies, he still retains the same amount of ammo and health as he entered the level. This is the first time I've seen any wolf3d have ammo and health kept from the start/entry of the level after death. It is also necessary because sometimes some levels require someone to use drone arrows to get around or to do the level itself. This benefit could also be a double-edged sword as in, if someone entered the level with low ammo and health, they might find themselves in a troubling location in regards to the game.

Now as far as some cons, I would say Oliver Green doesn't have any guns (part of the storyline and also I guess it would make the game too easy

), enemies oftenly don't drop many things for Oliver except for some food that heal a small amount. Sometimes I wish there were more arrows for Oliver to use as they can be scarce at times. Oh and one more thing, hit scan enemies can hit Oliver while Oliver has a hard time hitting them with projectiles and sometimes walls or certain objects block the way so Oliver can't hit them at all

Thank you for playing our mod...and for that secret level bug report as well.


My most favorite feature is that when Oliver dies, he still retains the same amount of ammo and health as he entered the level.

That was really last minute change, probably based on tester's feedback, I'm glad you like it.
Level 1 intentionally doesn't have this feature for obvious reasons.

Yes, some testers noted it, some not...we've added near release some more ammo and also made ninjas to drop ammo too, to address this issue.
I think it's still partly psychological as you're just used from Wolf3D to get ammo from each killed enemy, and whatever separate ammo we'll put in - will always feel too scarce relative to enemy body harvesting.


Oh and one more thing, hit scan enemies can hit Oliver while Oliver has a hard time hitting them with projectiles and sometimes walls or certain objects block the way so Oliver can't hit them at all

I think this is quite intentional and a nice new type of challenge one has smartly to deal with and mind his surroundings... Fresh dynamics.
Milanor

I heard there is a part 2 of this game coming out, is that true? If so, would Oliver Queen be able to use hitscan based weaponry later on?
doomjedi

@Milanor wrote:I heard there is a part 2 of this game coming out, is that true? If so, would Oliver Queen be able to use hitscan based weaponry later on?